Many of the bacterial infections that mimic Candidainfections are much more serious than a yeast infection, and common anti-fungal medications won’t help. 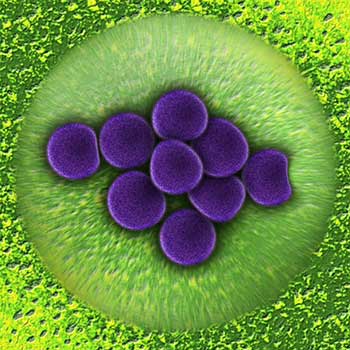 It is not possible to self-diagnose a vaginal infection by the symptoms alone. Yet studies have shown that the majority of women who buy over-the-counter fungicides are trying to treat a yeast infection, when they actually have one of the bacterial infections.

In some instances, especially during pregnancy, this can be a dangerous mistake.

The following list shows some of the conditions that may mimic a yeast infection, but which need to be treated differently. The best advice, as always, is to see a doctor and get her advice, instead of trying to diagnose your own symptoms.

Bacterial vaginosis is actually the most common cause of vaginal discharge, itching and an unpleasant vaginal odor, and is a much more serious medical condition than a yeast infection. You may have bacterial vaginosis if you have a vaginal discharge with a fishy odor that is stronger after sex or after washing, and which is clear or has a white, gray or yellow color. The discharge can be either light or heavy.

The symptoms can vary so much because bacterial vaginosis is caused by several different kinds of anaerobic bacteria that occasionally outnumber the “good” bacteria, (Lactobacillus), that live in the vagina.

This is not a sexually transmitted disease, even though it is most common among sexually active women. Bacterial vaginosis needs to be treated by antibiotics to prevent the bacteria from going into the uterus or fallopian tubes. This is particularly important if you’re pregnant. Since a douche can push the vaginal bacterial infections up into the uterus, you should never use a douche if you have these symptoms.

What that means, of course, is that you should never attempt to self-diagnose and treat a yeast infection when you’re pregnant, because it may be bacterial vaginosis instead.

A condition called vulvitis will have almost exactly the same external symptoms as a vaginal yeast infection, and can be caused by Candida. However, vulvitis can also be caused by dermatitis, seborrhea or eczema, or by an allergic reaction to chemicals found in soap, colored toilet paper, vaginal sprays, laundry detergent, and colored and scented bubble bath products.

Trichomoniasis is caused by a tiny parasite called Trichomonas vaginalis. Men get this parasite too, and it can be passed between sexual partners. It can also be passed from a mother to her baby during birth, and between couples who share sex toys. About half of the time an infected person has no symptoms.

In women, the common symptoms, (when there are any), will be a vaginal discharge that is thin or frothy, and which may have a musty or fishy smell. There may be itching or soreness, and there may be pain during sex or urination. There may also be tenderness in the lower abdomen. Symptoms are sometimes more apparent after your period.

Men who have symptoms may see a thin whitish discharge from the penis, and pain or burning during urination. Men often have no symptoms at all. Antibiotics are needed to get rid of the parasite.

Chlamydia and gonorrhea are sexually transmitted diseases that sometimes cause a vaginal discharge.

Chlamydia is caused by a bacterium called Chlamydia trachomatis. It can cause damage to a woman’s reproductive organs. Chlamydia is the most frequently reported sexually transmitted disease in the United States.

Many women infected by Chlamydia do not have any symptoms at all, but some people report a vaginal discharge or a burning sensation when urinating. If the infection spreads past the cervix and into the uterus and fallopian tubes, it can cause permanent damage, so this infection must be treated promptly by a doctor.

Gonorrhea is caused by bacteria called Neisseria gonorrhoeae. If the infection is not treated, it can cause pelvic inflammatory disease, which can be painful, and which can damage the fallopian tubes. This can lead to infertility or an increased risk of ectopic pregnancy.

This is another condition that may be present without symptoms. When symptoms do occur, you may experience abnormal bleeding, a vaginal discharge, a burning sensation when urinating, and irritation of the genital area. Men may experience a discharge from the penis and painful urination, and possible swelling or redness of the genitals.

Both Chlamydia and gonorrhea are serious health threats, and must be treated with antibiotics prescribed by your doctor. Anti-fungal treatments designed for yeast infections will not help!

A urinary tract infection is caused by bacteria that infect the urethra (the tube that urine comes out of). A urinary tract infection hurts, with pain or burning during urination. There may also be blood or mucus in the urine, (but not always); you may need to “go” often; and you may feel pressure in your lower back or abdomen. You may feel feverish or chilled, but this doesn’t always happen.

A urinary infection is a serious condition. If it is left untreated it can cause kidney damage. If you feel the symptoms, get yourself to a doctor.

When bacterial infections can be serious

If you have a vaginal discharge and/or fever, chills, nausea, vomiting, or abdominal pain, you may be experiencing symptoms of a serious problem, such as a kidney infection, appendicitis or pelvic inflammatory disease. If you have any of these symptoms you should get to a doctor or urgent care facility as soon as you can.

Why a diagnosis is so important

Clearly, a topical treatment intended for Candida will not help if Candida is not the cause of your symptoms. Some infections caused by bacteria or parasites will have temporary symptoms that go away, making it look like your self-medication worked – but only the symptoms are gone. The infection may still be there, even though you can’t feel it, and it could be doing damage. If you use a yeast infection medication and the symptoms disappear, you could be lulled into thinking all your problems are gone, when they’re not.

Your doctor may be able to diagnose your symptoms without a laboratory test, but if she’s not sure, your doctor will take a swab from the affected area and send it for culture in the lab.

You should also ask your doctor for a complete work-up (and not just a gynecological exam) if your yeast infections keep coming back. The chronic infections could be a way for your body to tell you that something much more serious is going on, such as diabetes, a thyroid disorder, leukemia, or AIDS.

Getting a diagnosis from a health care professional is important for another reason, too. As I mentioned earlier, yeast is very popular among genetic scientists because they multiply and change so fast. What this means is that every time you use a natural or over-the-counter anti-fungal medication when you don’t need to, you are giving your yeast an opportunity to become drug resistant. And this could make future real yeast infections much more difficult to treat.